Named after the pattern that appears on page 222 of H.M Gartley’s work “Profits in the Stock Market” published in 1935, the pattern remained largely unknown for sixty years until Larry Pesavento published “Fibonacci Patterns with Pattern Recognition” in 1997.

On page 222 of Gartley’s work he describes a pattern that is a “re-test” of an important top or bottom. The pattern is an AB = CD parallel move attempting to make a new high or low. The real beauty of this pattern is that when properly identified, it enables you to enter with the trend in a high probability reversal zone with minimal risk.

Over the last decade we have observed, especially in the case of “Bearish Gartley” patterns, that those with a climax top demonstrated by extreme volume spikes at “X” make for exceptional trading opportunities. The presence of such conditions prevent you from taking a “gamble” at a high or low.

Why Does it Work?

By the time this pattern has set up on the daily or weekly charts, there will frequently be some comment from fundamental analysts (in the case of stocks) that will support the new trend. Additionally, technical analysts will be talking about support (if a bullish setup) or resistance (if a bearish setup) and probable price reversal near the 50 day or 10 week moving average which will frequently coincide with the harmonic reversal zone.

Trader’s who are counting waves will also have this trade setup on their radar screen since the pattern fits exceptionally well into Elliott Wave theory completing at what would be labeled as a wave two (or B) and putting traders in a position to catch the potentially explosive wave three move or at least a wave “C” correction.

Add to these reasons the growing number of traders specifically looking to trade the Gartley pattern and you have something of a consensus among many different traders regarding market direction. The result is frequently an explosive and highly profitable trade setup. However, nothing works all of the time which is why the trader must control risk in the trade. This pattern works about 70% of the time but the necessary trade management will reduce the win/loss percentage to closer to 60% over a long series of trades.

Someone once asked me what Larry Pesavento’s major contribution to the business of trading was and what he will be remembered for. My response was that he had combined pattern recognition with Fibonacci ratios. The best and earliest example of this, to my knowledge, in his work from 1997. It would be my guess that Larry’s work on this subject will be read and quoted for many decades to come. Larry is unquestionably responsible for bringing the Gartley pattern with Fibonacci ratios to the attention of the trading community.
Larry has told me that he was introduced to Fibonacci numbers by his mentor John Hill. I met John in 2003 at the online trading expo in Chicago and was fortunate enough to have dinner with him and his wife as well as Larry and some other trading friends. John is an older gentleman probably best known for his work at Futures Truth. It was remarkable to listen to him talk about his quest for trading knowledge as a young man and his intense passion for furniture warehouse trading spanning five or six decades. That passion similarly resides in my mentor Larry Pesavento. His contributions to the trading profession are profound and have changed the lives of many individuals. For help with online gaming check out no deposit slots keep your winnings

As in every other discipline, traders build upon the work of those who came before them. The swing trade model I developed while working with Larry has documented well over 1000 trades since 2000. A complete record with charts and a spreadsheet that compiles the results of trading Harmonic setups on the daily and weekly charts. Most of these trades involve Gartley 222 patterns. Is there more to be discovered about trading this pattern? I believe the answer to that question is yes. Various filters can be applied that statistically weed out setups that are less likely to produce a good result.

Let’s look at an example of a Bearish Gartley “222” pattern. This is a recent trade from our swing trade model in Moody’s (MCO). The first thing I want to point out on this chart is the professional selling that occurred on February 16, 2005. Note the green alert at the top of the volume window which I have highlighted with a yellow circle. This is a proprietary alert I’ve developed that is triggered by high volume. Following the decline that lasted until April 18th, there is an ab=cd correction to this new downtrend. This is both symmetrical in time and price and terminates in a Fibonacci resistance zone that you see drawn in on the chart. 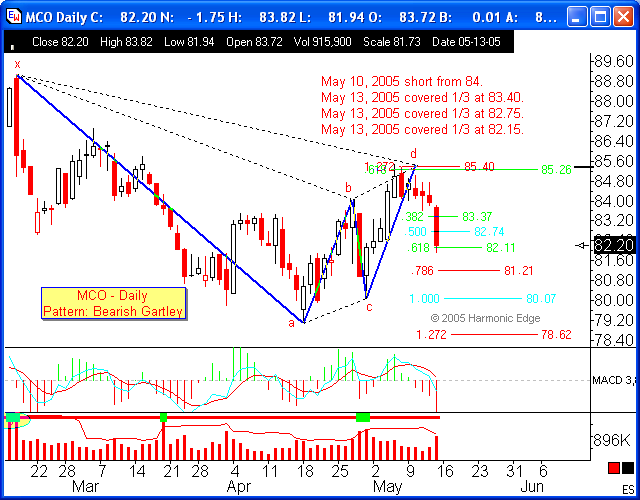 If you pull up a chart of Moody’s, you will see that it put a bottom in on May 13, and has rallied since that time. Yes, there was the probability that it could have gone much lower! However, this turned out to just be a correction – there was no explosive wave three to capture and that is often how it works out. So you have to take profits when they are offered and control the one thing that you can – risk!

Bear in mind that what looks like a Gartley to some traders looks like a cup and handle pattern to others! So if you are in one of these trades and the stock has good fundamentals you have to be careful if you see a small pullback at completion followed by a strong surge.

The next example is another recent trade from the swing trade model in Emerson (EMR). The chart shows 3 drives or “pushes” as the pattern completed. These would be very clear on a 60 minute chart. Emerson is a stock that trades a little over a million shares a day, but on April 28 it more than doubled trading almost 3 million shares. On April 29th,  the market could not even test the low from the 28th and prices proceeded to rally sharply reaching the .618 profit objective in only four days. Note how we took profits all the way up as the market offered them. 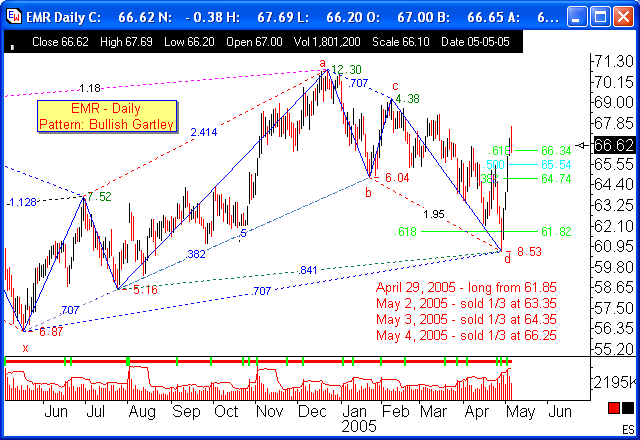 The last example I’ve selected is the current daily chart of the S&P 500 which contains a bearish Gartley 222 pattern. There are actually two nice ab=cd corrections (abc in Elliott Wave)  in this chart. The first is labeled with lower case and the second with upper case. As you can see from the indicators, there is a loss of momentum at the recent highs. All of the conditions were in place for a strong reversal. However, anything can happen in trading markets. It is very easy to get overly excited and bet the farm on this kind of setup but that is very unwise. 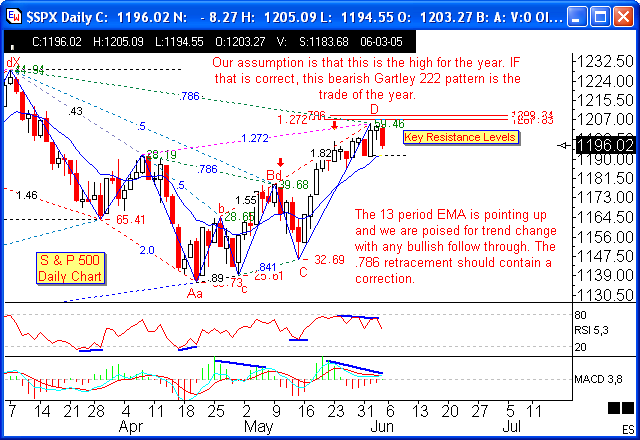 It is one thing to be able to recognize time, price and pattern. It is another to actually trade it profitably. To do so requires more than just identifying the market conditions which make for a good trading opportunity. You must be able to carefully allocate your risk capital and establish a maximum stop loss that statistically gives the pattern room to play itself out without damaging your trading account should you be wrong on a specific trade or even a series of trades.

Additionally, you must have a plan for taking profits and reducing risk as you go along in a trade. You must have enough confidence in what you are doing to execute consistently over a series of trades, which means you had better have done your homework because once the bullets start flying in the heat of battle there is no one to save you but yourself. For those willing to do the work, trading can provide enormous freedom and pleasure. For those looking for easy money there will only be disappointment.