The harmonic approach to trading the markets is a cyclical one. Our tools for evaluating market position and trend are pattern recognition, momentum analysis, Elliot Wave Theory and dynamic price and time analysis. While some technicians will attempt to force wave counts on every market at every time, such an approach is neither practical nor profitable.

A working knowledge of Elliott wave theory is very useful for several reasons:

The 5 wave pattern comes directly from the work of R.N. Elliott and was re-introduced to the trading community in 1978 in the book Elliott Wave Principle – Key to Market Behavior by A.J. Frost and Robert R. Prechter. The basic assumption is that following the completion of the 5th wave the market will retrace at least 50% of the entire move. The 5th and final wave can unfold in several different ways (typical 5th wave, truncated or failed 5th wave, diagonal 5th wave). Here are two examples: 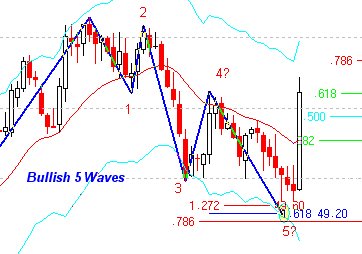 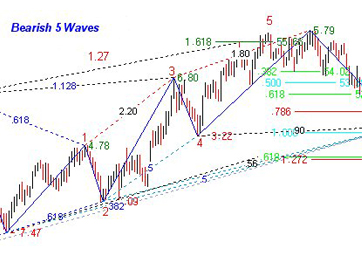 The abc correction (also referred to as an ab=cd) is by far the most common trading pattern we see in this method. These form in all markets and on a daily basis. They can be very effective ways to jump on a trend. The challenge with this pattern comes in correctly identifying trend and realizing when your abc is morphing into something else like a complex correction or an impulse wave.

R.N. Elliott studied price movement in the markets and observed patterns that repeat themselves.  He used this discovery to make accurate forecasts in the stock market.  To the untrained eye, market movement may appear random and unrelated.  In reality, the markets are tracing out patterns that you can learn to recognize and profit from.   Mr. Elliott named this discovery the ‘Wave Principle’, but died before his work became well known.  In the late 1970’s Robert Prechter and A.J. Frost brought Elliott’s work out of obscurity in their book ‘Elliott Wave Principle‘.  This article offers a few basics in understanding the Wave Principle.

Society behavior trends and reverses in recognizable patterns.  This principle is found in market behavior because investors act and react to transaction information.  The behavior forms repetitive patterns, and because the patterns are repetitive, they have predictive value.  Elliott identified thirteen patterns that recur in the markets.  He then assembled these patterns or waves into larger versions of the same patterns.  These became building blocks to patterns of the next larger size.

The most basic pattern is a structure consisting of 5 waves.  Three of the five waves are directional and referred to as Trend waves.  These trend waves are separated by two interruptions that are counter trend and referred to as Retracement waves.  Using T for a Trend wave, and R for a Retracement wave, the pattern can be described as T-R-T-R-T.  The classic pattern is shown in this theoretical chart. 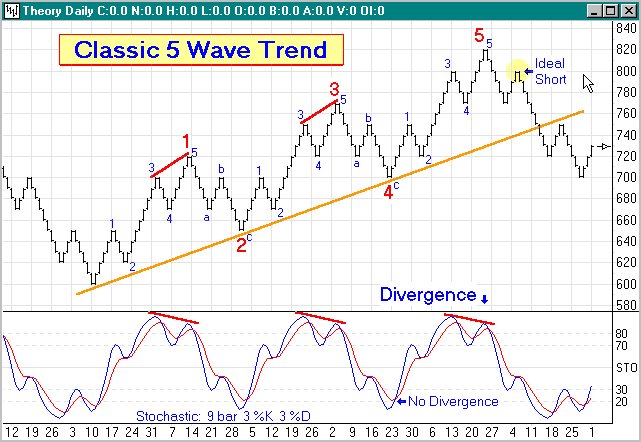 Fairly often, a retracement wave retraces a Fibonacci percentage of the preceding wave.  Sharp corrections often retrace 61.8% or 50%.  Sideways corrections often retrace 38.2%, particularly in wave 4.  Most analysts focus on Retracement waves and measuring wave heights to forecast a price objective using Fibonacci ratios.  Tip: Use Fibonacci principles to forecast a price, and use Elliott principles to determine when a wave is mature or finished.  Look for correlation of the two.

There will be times when market analysis is confusing and the interpretation is unclear.   My advice is to leave confusing patterns alone until subsequent waves clarify the picture.  The best approach is to apply deductive reasoning.  Learn Elliott Wave Principles, rules and patterns, and use this knowledge to deduce what will be the likely course for the market.  A primary purpose of the analysis is the determination of whether a pattern is complete, whether a wave is finished.  If the market changes direction as expected, you caught the turn.  If the market misbehaves, your conclusion is wrong and money at risk should be immediately reclaimed.  Tip: Be patient and understand first where the market is at in the unfolding pattern, and then trade with the trend.